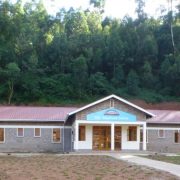 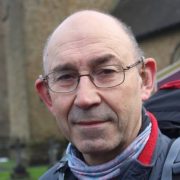 Hugh Burgess, Chair of Jamie’s Fund is taking three months away from his role as Priest in Charge of the Halkyn Mountain Parishes in North Wales to walk the 1500 miles to Santiago in Northern Spain, starting at the end of February 2016.  He is also raising money for Jamie’s Fund while he walks.

You can read more about Hugh’s trip here in a very supportive article from “The Leader” and you can follow his blog to see how he is coping with sun and mud now he is into France, having walked from Halkyn to Southampton.

You can also donate to Hugh’s “MyDonate” page in aid of Jamies Fund here OR copy the QR code below – please feel free to make it widely available! 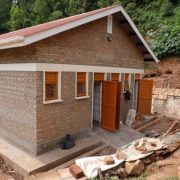 Although there is great progress towards completing the building of the new Mental Health Unit at Kisiizi we still need your help to ensure that the building is completed and fitted out to the highest standard, so please don’t stop your fundraising efforts!

It has taken longer to get to this point than we had hoped but a lot of people have worked very hard to get the project to this point and we are in the most exciting phase.  Once the building is complete, mental health patients and their families can receive even more support from the great team at Kisiizi.

You can donate very easily on-line by clicking here… and please don’t forget to Gift Aid your donation if you can – it costs you nothing and significantly increases the funds Jamie’s Fund receives.

We set off from the guest house in Entebbe, Uganda in the cool of the morning and dropped down to the shores of Lake Victoria. Our bikes were loaded into a small boat and we puttered across the bay. We reassembled the bikes and panniers and set off down the dirt road on our journey to Kigali.

There were three of us, me from UK and two Ugandan friends. Bosco, a driver and Isaac, a computer science student and Scuba instructor.

Avoiding the busiest, dangerous roads and using a mixture of dirt and tar roads we wove our way south west across Uganda. Some of the dirt roads were hard going, rough with loose grit on top and with the occasionally steep hill. But we saw so much of rural life, away from tourist routes. Countless children were excited to see a “mzungu”, a white person, cycle past. We could hear the birdsong and identify a number of the calls.

Cycling4Most of the tar roads were good, many with a meter wide shoulder for cyclists and pedestrians, making us feel safer from the occasional bus roaring past.

A rest day with some bike maintenance then we headed out on the last lap. First a gradual climb up a valley leading to a stiff climb at the head to get over the ridge. On to the Rwandan border and then a steady climb of three thousand feet to reach our resting place.

We relished a glorious twenty mile descent the next morning, with views over the valleys at first and then becoming more restricted as we got lower. There were a number of men on bikes with 40 litres of milk on the carrier heading to Kigali. We kept pace with some of them for a while, they were faster on the descents than we were, with their greater weight, and we would overtake on the more level bits, where our gearing made the difference.

Cycling2And then we turned a corner and there was a group of multi-storey buildings on a hill top in the distance. Kigali, our destination. Eight miles later we were there and we celebrated with a banana split, as nothing like that had been available en route.

403 miles, no punctures, no hassles or security problems and a chance to see rural Africa in a way that allows genuine contact.