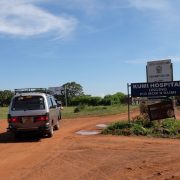 Kumi Hospital lies several km from the main road north from Mbale to South Sudan, in eastern Uganda. On a dirt road with a very few scattered houses, we found the hospital compound. It’s spacious, pleasant and peaceful. The few patients we saw strolled among the trees, wards and hospital departments. 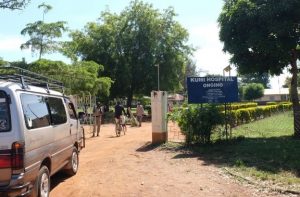 The entrance to Kumi Hospital

At the main offices a secretary greeted us and led us to the Human Resources office. The in-charge there looked a bit panicky. (“When did you say you sent the email?”) Eventually they found clinical officer Francis Ejoku, who knew exactly when we’d sent the email and had been our chief correspondent. He was quickly joined by registered nurse Amuron Scholastica. With these two enthusiastic individuals we had a very happy two-hour discussion. 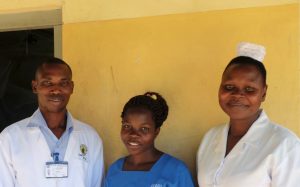 Francis, a volunteer nurse, and Amuron

In August JF sponsored mhGAP training in Kampala. The three hospitals JF already supports – Kisiizi, Bwindi and Kagando – sent 12 delegates. They were joined by eager volunteers from other church hospitals. Kumi was one of these. Francis and Amuron found the course very helpful, and have already started rolling out their training to their colleagues. Neither is psychiatrically trained but both have a genuine interest in mental health.

Kumi began as a centre for the treatment of patients with leprosy. Such patients were regarded as highly contagious and kept away from the general public, hence the remote location. Today leprosy patients are treated in the medical wards along with everyone else, with no risk. However, the ward is laid out in small self-contained units, ideal for treating MH patients who may be disturbed or needing a particularly quiet environment. 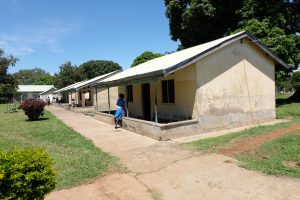 With no specialist psychiatric staff, Kumi relies on a visiting clinical officer who comes once a week and sees mostly epileptic patients. Seriously mentally ill patients have to go to Mbale for admission.

On our tour of the hospital we met a gentleman who had been admitted with self-poisoning following a big fight between his two wives. One of them was hurt. The court case ended in a large fine for the one inflicting the damage. But as she had no money, the husband was expected to pay. The result was his significant overdose. Polygamy is complicated.

Suicide and self-harm are common in this area. We would be interested to know why.

People in rural areas like Kumi can’t afford to spend money on relatives with mental illness and epilepsy as these are long term conditions. They can’t afford the transport to bring patients for assessment or review either. Many view the mentally ill as “useless” – families and communities don’t think that anything can be done to help. They imagine that the person will never be well enough to work in the fields where their food is grown.

Amuron and Francis would love to see a change in people’s attitudes. They want to reduce the stigma which causes so much suffering. They would love it if more mentally ill people could be properly cared for. And they would be really pleased if their colleagues and the local community knew a lot more about mental health and how it can be treated.

When we asked Francis about his motivation he said “It’s about having a mind to help”….. “You have to see these people in your heart”.

Since our visit, Jamie’s Fund has sponsored Amuron and Francis to carry out mhGAP training with the clinical staff at Kumi hospital and also at Ngora Freda Carr hospital which is about 15 miles away.