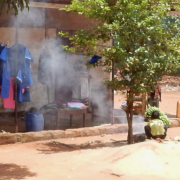 As the world woke up to the threat of Covid in early 2020, many countries closed their borders and locked down, in an effort to protect their citizens. Uganda was one of them. The economic impact of very hard lockdowns was much worse for the poorest of that country, than the effects of the virus itself. Apart from some early food handouts in Kampala, there was no Government support for the vulnerable.

Schools and universities in Uganda were closed for twenty two months, the longest in the world. Children and students have only returned to learning from January this year. Everywhere we travelled, both rural and urban, we heard concerns expressed for the young. More children have been exposed to domestic violence and abuse. More are living in poverty. Many teenagers have completely disengaged from education, and found ways to earn a little money, day to day. Their mental health is said to have suffered. Suicide and suicide attempts have become more common. More alcohol and substance misuse is evident. More girls as young as 12 and 13 are pregnant, and delivering a baby at such a young age carries the risk of more complications for both mother and child.

These concerns have been substantiated by recent research coming from the London School of Hygiene and Tropical Medicine*: it is estimated that 15 million children in Uganda have not attended school for 22 months. Many were unable to access and use distance learning materials. There has been a 22.5% increase in pregnancies among school-going girls and young women between March 2020 and June 2021. There was an increase in child labour from 21% to 36%, affecting girls in particular. Some schools have gone for good, unable to reopen for lack of staff, students and funding, or sold for redevelopment.

As elsewhere in the world, the pandemic has worsened existing inequalities and barriers to education, training and employment. Those in the poorest households have fared worst. With Uganda still a low income country, with ambitions for development, you wonder how these lost years and lost lives will affect the nation-building which is needed.