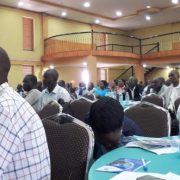 Across the world, mental health is rarely at the top of the agenda when it comes to discussing healthcare. It was a wonderful milestone, therefore, when the coordinating body of the Church of Uganda hospitals, UPMB*, decided to feature mental health as a significant part of its annual symposium for 2018.

So it was that on the 29thNovember, four representatives of Jamie’s Fund arrived at the Silver Springs Hotel in Kampala, along with over 400 representatives of more than 200 health centres and hospitals from across Uganda that make up the UPMB “family”. 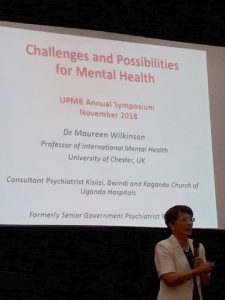 It was an interesting and varied programme with most of the presentations also being available on-line**.  The morning was taken up with a variety of business and after, a good lunch, the symposium settled down to hear about mental health.

The first of the mental health presentations was delivered by Jamie’s Fund in the person of Dr Maureen Wilkinson.  Maureen’s approach was highly effective and differed from other presentations:  Rather than drily quoting the numbers, or listing the challenges of delivering mental health in Uganda, Maureen simply told the stories of a number of patients who had been released from their chains and once again enabled to walk in the light.

As Maureen spoke, the audience listened spellbound.  Many of the stories were dramatic, both in the pain they showed initially, and in the release that came through good healthcare often supported by effective drugs.  As each tale of release was told, the audience clapped enthusiastically.  But, of course, not all patients live to have a 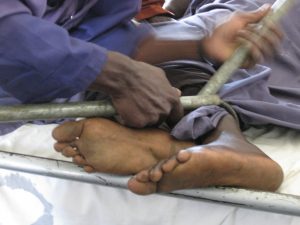 better life and this in itself was a challenge to the audience:  How can we find and treat people much sooner so that they don’t become chronically ill and die prematurely? These and other challenges were posed by Maureen and left the audience in no doubt that the challenges are there but that they can be tackled.  This was illustrated also in the next talk.

Following Dr Francis, Dr Joyce Nalugya, a Ugandan psychiatrist, spoke very powerfully about the need to put much greater resources into mental health if we don’t want a major crisis.  In many ways, Dr Joyce gave the evidence that supported the talk given by Dr Maureen.

It was hugely encouraging for those of us from Jamie’s Fund, not only to have a slot in the programme of this prestigious event but to find that mental health is increasingly being seen as important.  Certainly the delegates left the symposium knowing that good mental health care delivered early and consistently has the power to transform the lives not only of patients but of their families and communities.

**Available on Dropbox at: https://www.dropbox.com/sh/skglzzbw7885g1i/AACoiFsMwlf2dqZnvXH9XRnXa?dl=0