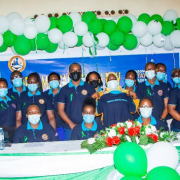 Lubaga Hospital in Kampala is a large busy hospital.  They are working hard to develop a mental health service.  They have had a visiting psychiatrist for some years, but they have become aware that there is a wider need for mental health care which they are not yet meeting.

The hospital has already run two mhGAP courses training 46 members of staff.  As a result of the training a mental health team has been established in the hospital which meets regularly to discuss how to improve support in the different hospital departments.  They have also set a programme of quarterly continuing medical education session on mental health topics. Recently the hospital appointed two certificate mental health nurses, which is likely to speed up the integration of mental health care into all their services. They are also sending a member of staff this year to train at Butabika as a psychiatric clinical officer.

World Mental Health Day in October is dedicated to promoting the understanding of mental health education, awareness and advocacy across the world.  Sister Lilian Nakayiza and colleagues thought marking this day would be a good opportunity to raise the awareness of mental ill-health in the hospital and for staff to talk about the work they were involved in.

The week before the main event a series of mental health education talks were held in different departments for patients and their visiting relatives. Over 300 people heard the talks about the common mental illnesses, including epilepsy and alcohol and substance abuse.

A group from the mental health team went out to a suburb of Kampala to hold a meeting in the community about mental ill health.  25 people came, including 5 village health volunteers.  These volunteers can have an important role in sharing information in their communities.

On the 14th of October a celebration for World Mental Health Day was held in the hospital with the theme “Mental Health for all, leaving no one behind”.  The aim was to raise awareness of mental ill health and also to mark one year of working with Jamie’s Fund.  Just imagine all those members of the mental health team wearing their new team T shirts, now their uniform, which illustrate the partnership between the hospital and Jamie’s Fund.

Dr Hafsa, the lead for mental health in the Ministry of Health addressed the group and others spoke of the work that was being done and some of the plans for the coming year.  Ewan and Maureen Wilkinson were delighted to attend by Zoom! A cake was cut and refreshments served in a gathering decorated with cheerful balloons.

The clinic attendance figures for the past 12 months were reviewed.  Over 800 patients were seen who were diagnosed with mental illness.  Over half of these were diagnosed with anxiety, some of which were related to problems due to the Covid situation.

One of the presentations ended with the message: