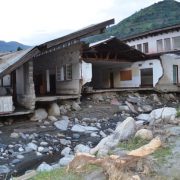 It seems like another world, but just over a year ago, as part of our last visit to Uganda, Maureen Wilkinson and Simon Tavernor visited a hospital in the foothills of the Rwenzori Mountains.  Kilembe Mines Hospital was keen to develop mental health care, recognising this as a largely unmet need locally. It was agreed that Jamie’s Fund would do what it could to support this.

The Hospital was established back in 1951 to serve the staff of the Kilembe Mining Company and the local community. (Copper and Cobalt are the minerals extracted and processed here) It is now a joint venture between the Company, the Government of Uganda and Uganda Catholic Medical Bureau. It sits in the flood-prone Nyamwamba River valley, over 50 miles away from the nearest Regional Referral Hospital at Fort Portal.

in May, we heard that the hospital had been destroyed by a torrent of water, mud and boulders, washed down when the river higher in the mountains had burst its banks after unusually heavy rains. Buildings, medical stores and equipment had been washed away, as had the homes of staff and villagers. People were evacuated to temporary shelters.

We heard no more for a long time, and assumed that sadly that was the end of this hospital. However, just as we were commissioning the next mhGAP Train the Trainer workshop (to be run at Butabika before the end of the year) there was news. Kilembe Hospital had temporarily relocated to buildings in the nearest town, Kasese, and was up and running again!! Not only that, but they were eager to send two of their staff to attend the training and begin the process of expanding their mental health care service.

We stand in awe of their spirit and resilience.

Dr Diana Atwine, Permanent Secretary at the Ministry of Health, visited the site in October , and committed that the hospital would be rebuilt in a safer location.