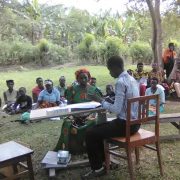 The value of mental health outreach into the communities of rural Uganda was demonstrated again this week as the team from Kagando Hospital, led by PCO Joseph Wakabo, held an outreach clinic at Kinyamaseke, supported by Jamie’s Fund.

Kinyamaseke is 12km from Kagando Hospital which can take up to an hour, travelling by car on local roads. This community is located just north of the Queen Elizabeth National Park in the East Africa Rift Valley and is about 45km south west of the district capital of Kasese.

The team, consisting of Joseph Wakabi psychiatric clinical officer, and Robert Baluku a mental health nurse as well as the driver, held an outdoor clinic and were able to meet 43 patients during the visit. This is highly significant given that most of these people would otherwise have had to walk to the hospital to meet the team to collect the regular medication upon which they depend or to receive an initial diagnosis for their condition. 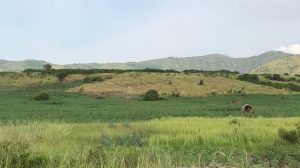 Crops growing near the clinic

Of the 43 patients, just over half live with epilepsy, a condition that is treated by mental health teams in Uganda and in much of Africa. Of the remaining patients, there were a number of conditions including psychosis and one person with possible Parkinsons disease. All the patients will be seen again on the 30th May provided that they can again get to the clinic. The majority of patients live in the sub-countyof Munkunyu and the maximum distance patients had to walk to the clinic was about 5km.

Last month two men who had been shackled because of their mental disturbance were started on treatment and we are very pleased to hear that it was now safe for them to have the shackles removed. This will enable them to return to being constructive members of the community.

The cost of providing a clinic like the one at Kinyamaseke may be as little as £50, but it can transform lives. Jamie’s Fund is pleased to support this work but it depends on your generosity and support. Please donate today, if you can. 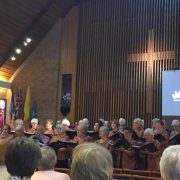 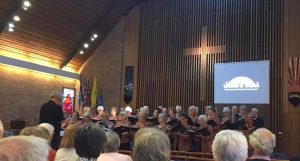 The Castle Singers, a Heswall choir, gave a concert in support of Jamie’s Fund in Heswall URC Church at the end of April. It was an enjoyable evening with a light and varied programme
including the old Flanders and Swan song “The Gas Man Cometh” and a spirited modern rendition of “To God be the Glory”. There was a good turn out with people coming from North Wales and Liverpool as well as Wirral.

Some people had donated generous prizes for the raffle. The first prize was for afternoon tea for 6, provided in your own home.

Overall one thousand and fifty pounds were raised. This will fund the training of seven people on the mhGAP courses we are organising in Uganda. Warm thanks to the Castle Singers, to all who helped on the evening and to those who supported the event. 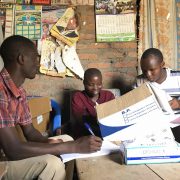 In the UK we occasionally ask the doctor to visit us at home, if we are particularly ill. In Uganda a home visit from the doctor would be very unusual, certainly outside a city. In rural areas your options are limited. There may be a local traditional healer but if you want to use “so-called” […]