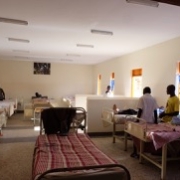 From time-to-time we are reminded that Covid19 is not the only story in town and even more importantly that there are good news stories that have nothing to do with Corona virus.  A recent story from Georgious Orishaba, the psychiatric clinical officer at Kisiizi Hospital is a case in point.

In September, 2019 a lady was picked up from the side of the road by a passing well-wisher and brought to Kisiizi Hospital.  Here we call her Mary (not her real name).  Mary was 34 years old and suffering from a mental illness that meant that she was unable to tell the staff very little about herself, her family or where she came from.  What little she did know kept changing.

Later Mary remembered that she had worked a time for a member of staff from Kisiizi Hospital and so a little information about Mary became known.  She was also diagnosed with a range of issues including depression and psychosis associated with HIV as well as a number of other conditions.

Over time and with treatment it became clear that Mary had been abused as a child from an early age and had not only lost one child but had also had two others.  As a result of this she had been blamed by both her parents and her employer and so it was she was eventually found at the side of the road.

Although Kisiizi is a not-for-profit hospitals, patients are normally expected to contribute towards their medical costs and to provide their own food.  For Mary this was a non-starter since she had no resources to meet any of the costs.  However, Kisiizi Hospital stepped in and supported Mary from September, 2019 until her eventual discharge in July, 2020.  After 10 months of treatment members of her family were finally found.  Unfortunately both her parents had died but we are pleased to report that Mary has finally become settled with her aunt.

At Jamie’s Fund, we are always delighted to hear stories about patients who have come through challenging times and are very pleased that, through the Jamie’s Fund investment in the Ahamuza Centre, Kisiizi is able to provide a certain amount of long-term care of this kind.  We are also aware, however, that the cost to the hospital of providing both medical and nutritional care is significant.

There are many stories like this and Jamie’s Fund is pleased to support work with patients like Mary.  If you would like to contribute towards the work with people with mental health in Uganda, please click here.