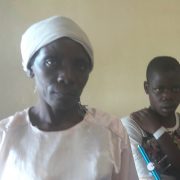 Enock was just one year old when he had his first epileptic fit. Now 16, his whole life has been affected by the fits and the responses of local people to both him and his family.

In most of Africa the traditional understanding of epilepsy is the same as for mental illness. There is a widespread belief that these problems are caused by demons, evil spirits who enter the person and cause the abnormal behaviour. Another explanation might be that someone else is jealous and has organised the local “witchdoctor” to put a spell or curse on the person who then develops what we know as epilepsy. Sometimes it is thought that the ancestors are angry with the family or community, and have chosen this person to become sick to demonstrate their displeasure.

Modern medicine has shown that epilepsy is caused by an abnormality in the brain, which we can see and measure through brain wave recordings and brain scans. We understand a lot about the cause, and we can treat the illness very well with the right tablets. However, people in the villages have little or no idea about such things.

If you believe that the problem is evil spirits, you would not think to go to a hospital for treatment, but you would naturally go to the local African church for prayers to exorcise the demons. Sometimes these prayers can go on all night, even for days and nights, giving the person no sleep.

Enock’s mum was left a widow with her two boys. They have tried traditional medicine and prayers. They have also sometimes come to their local health centre where they can get modern medicine for the epilepsy. However, sometimes the medicine has been out of stock. Over the years Enock’s treatment has been very erratic. In addition, the health centre staff who treated him forgot that a little boy becoming a teenager would need bigger doses of medicine as he grew up. For all these reasons his fits have not been well controlled.

People in the villages of Uganda are very afraid when they see someone behaving strangely. There is a fear that if the “possessed” person comes too close, the demons might enter them too! People with mental illness and epilepsy are also widely regarded as “useless”. The children at Enock’s school often taunted and mistreated him. He attended just one year of primary schooling before he gave up.

If you keep having fits, people in the community can treat you cruelly. And continuing fits do further harm to your brain, with the results that in in the end you can’t think very clearly or learn very easily. There are other possible harms as well, if you go on having fits, and you may come to physical as well as mental harm. This has happened to Enock who suffered a really serious accident.

Ugandan houses in the villages often have an open fire in the main room where everyone lives, cooks and eats. Recently Enock fell into the fire in a fit, and his arm was burnt to the bone. His mum delayed bringing him for treatment so the injury got infected, and Enock has now had to be admitted to hospital and has needed complicated surgery to start repairing the damage.

When we met Enock and his mum, I was struck by how sad he looked. He has little to do at home, a few household chores maybe, or making simple bricks. But many employers would never think of employing someone with epilepsy or mental illness. Who knows what might happen if the strange behaviour started when this person was at work?

We discovered that Enock has all the signs of depression, and we weren’t surprised. The mental health team will now get to know him better, and try to get his medication properly sorted out. They will talk with him, so that he can begin to feel better about himself.

We’d like to get him and his mum some support from the village health team worker. The team might even be able to help him with some work therapy. As with many of the Bwindi team’s patients, getting them into the kind of employment that earns regular money helps them gain some self-respect. And the community also learns that these people are certainly not useless.

Maybe some conversations with the local community could help too. In another town, the mental health team ha 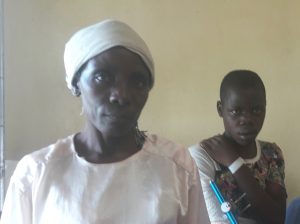 s worked really hard at telling people about modern treatment for both epilepsy and mental illness. Of the hundreds of people who heard this message, almost no-one knew there was such a treatment. However, if people could be encouraged to come for modern medicines and treatment, there might be much more hope for Enock and people like him.

We asked mum and Enock how they would feel about us taking a photo, explaining that we wanted others to understand what it is like for them, having to deal with these problems every day. They agreed. As we showed him his photograph, Enock smiled for the first time that day.

If you would like to support us in bringing help to people like Enock, please click on the Donate button and make a donation, today.  All donations, large and small are welcome. Thank you 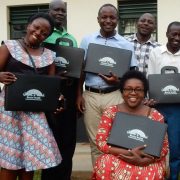 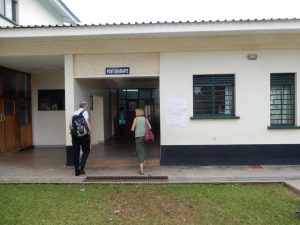 Arriving at the post-graduate centre at Butabika

In the end, thirty one people came together at the postgraduate centre at Butabika, the national psychiatric hospital in Kampala, for a time of professional development, under the leadership of psychiatric staff from Butabika, and supported by some of the team from Jamie’s Fund.

We had three great days together with laughter, sharing ideas, teaching and learning. There were challenges at different levels; there was no water for the whole hospital including the accommodation where they were staying. Some of the teachers turned up very late and weren’t as interesting as they could have been; time keeping to begin with wasn’t great; but we improved that significantly. 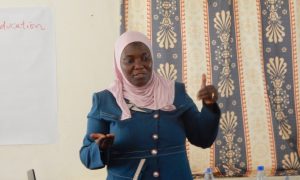 We were delighted that Dr. Hafsa, the government’s mental health lead came to open our workshop. She was very appreciative and encouraging about the developments that Jamie’s Fund is supporting.

The three day workshop covered a range of topics that included psychotherapy skills training, management of emergencies such as agitated or suicidal patients, and rehabilitation of patients with longer term illness.

Sessions on service development were particularly well received, because delegates had begun to catch the vision of what might be possible if they could bring services to the very villages where their patients live. Where people can attend their local health centre they don’t have to pay transport to get to the hospital, and the health centre staff can get to know them and their families. The Bwindi team started this kind of community service first and so provided a very helpful model for others to think about, imagining what they might develop in their own settings. We also heard about their alcohol harm reduction service: an important challenge all over Uganda. 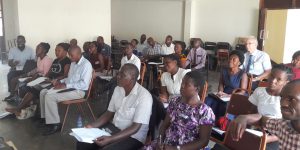 Some of the audience

Service development needs excellent leadership and good teamwork, topics that provoked a lively interaction. We included discussion on the well-being of professionals working in mental health, which can bring particular pressures and certainly carries its own stigma.

One of the recurrent themes became almost a running joke: Don’t forget to collect the data! We all need data to discover the impact of any new developments. And Jamie’s Fund needs that information if we are to advocate for more resources.

Over the three days everyone worked hard but it wasn’t all work and, towards the end of the workshop, we all went out for a celebration dinner at a nearby hotel where we enjoyed having time to talk with each other about life apart from work. The challenges that some people had overcome in order to reach their current position were inspiring. One older man told me how, when he went to secondary school, he had to walk all the way, some 70 kilometres in 2 days, carrying his belongings in a wooden case on his head and on top of that was his mattress that he slept on. Others were beneficiaries of the sacrifices that the families had made to fund their education.

Dr Basangwa, the executive director of Butabika came to close the workshop. He had taught many of the people on the course and he was treated with respect and affection. It was impressive that he still knew many of their names.

A group photo with Dr Basangwa

Too soon it was over. People departed clutching their attendance certificates and bags printed with the Jamie’s Fund logo. The appreciation and gratitude of everyone involved was touching. Other than the learning and skills training, one of the great benefits of the workshop is the mutual encouragement to aim even higher: One delegate said he came thinking that his hospital was doing well: he then discovered there was so much more they could do, and he left full of plans for the future. 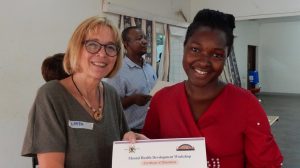 A participant receiving her certificate

We intend to organise another workshop next year, as we believe it is valuable for people to come together to compare experiences of the challenge of working in mental health, an area in which the staff share the stigma felt by their patients. In their own workplaces they are often isolated and unsupported. These days proved a very worthwhile time together.

As you will appreciate there is a not insignificant cost to bringing people together in this way. The benefits, however, far outweigh the cost as students are energised to try new approaches, encouraged by the stories of what is happening in other areas and supported by the new friends and colleagues made. The investment in these committed people is already benefitting large numbers of people across Uganda. If you are able to support this initiative, or other work in which Jamie’s Fund is involved, please go to the Donate site now 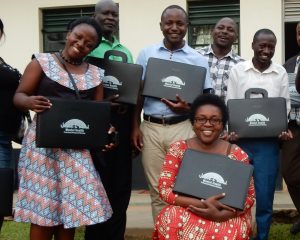 Participants with their bags