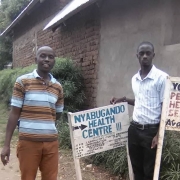 Mental health clinics in Uganda invariably include many adults and children with epilepsy. Part of the reason for this is the lack of neurology specialists in Uganda, and little capacity within general medicine, so these patients are usually seen by mental health services.

However, it is apparent too that epilepsy just seems to be more common in Uganda than we are used to in the UK. This higher incidence of epilepsy is confirmed by several studies. In fact, epilepsy is 2 to 3 times more prevalent in Sub-Saharan Africa than in industrialised countries. This may be due to factors such as higher rates of birth defects, minor brain injuries, parasitic infections and road traffic accidents.

In low income countries generally, the prevalence of epilepsy is higher in rural areas than urban ones. This might be due to having less easy access to maternal and obstetric health care, as well as for head injuries, in the remote rural areas. There is also the suspicion that town relatives with epilepsy might be sent back to the village.

A 2018 study in south west Uganda found a particularly high prevalence (20.4 in 1000) in children. This reduced with age, especially over the age of 5 years. So do some children naturally ‘grow out of it’ or are there other explanations? We don’t really know.

Many children with epilepsy suffer burns as they fall into the fire during a fit, as cooking is usually done on an open fire. Stigma, injuries and burns, and the reaction of others, make the life of a person with epilepsy a very difficult one.  They may be excluded from school or employment.

Whatever the causes are believed to be, mental health staff have a critical role to play. Not only in offering medication as appropriate, but importantly in helping the parents and carers of those with epilepsy to understand it better, and to know how to keep their child or relative safe.

As the mental health teams work with such families, they can sometimes make a dramatic difference. In one family, the eight year old son had frequent fits, and it was judged that the father was the agent who was bringing in the demons who were the cause. Not only was the child excluded from school, but the father was sent away from the village. With treatment, the boy’s fits ceased and he was allowed to return to school. The team from Bwindi Community Church of Uganda Hospital helped the family and local people to see an alternative explanation, and the father was restored to his place in the home and in the community.