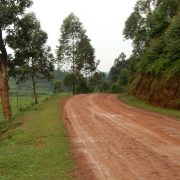 The Ugandan hospitals are facing hard times at the moment, as are many of the local people. The initial lockdown because of Covid was eased slightly on the 5th of May but there is still no public or private transport allowed without specific authorisation.

This makes it hard for people to get to hospitals when they are ill and there are too many disaster stories about mothers in labour not being able to reach hospital for timely interventions. Staff who live some distance from the hospitals also struggle to get there to work, or have to stay at the hospital if they can, but apart from their families.

Access to food is a problem in some places. Surveys in different African countries have shown that more than two thirds of people said they would run out of food and over half would run out of money if they have to stay at home for 14 days. The lockdown in Uganda has been longer than this already.

People in different countries are saying “It is hunger I am worried about, not the virus”
So far Uganda has done well at limiting the known number of cases of Covid and many of the rural hospitals have not seen any cases. So, you can understand the sentiment.

Because of the restrictions on transport, the hospitals we work with are not seeing anything like the numbers of patients they are set up to treat. They are also having to spend more than budgeted on hand sanitizer, PPE clothing etc. This means the hospitals are under significant financial pressure.

There is a risk that resources are being diverted from other health issues such as HIV and TB. Much progress has been made in establishing effective programmes to maintain people on their treatment, but the current restrictions make it hard for some of these programmes to operate and there is a risk that some of the progress in treatments made in the past decade will be lost. 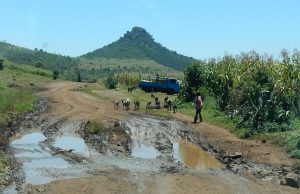 Even a small amount of water makes roads difficult to pass

Parts of Uganda are facing other challenges. In the west, one of the hospitals we visited last year has been largely demolished by flood waters and many people have lost homes and crops. One lady said “You tell us to stay at home, but we now have no home. You tell us not to go to the market, but to work in the smallholding, but we now have no small-holding.”

In the east of Uganda and in Kenya and South Sudan there is the largest swarming of locusts there have been for many years. They devour enormous quantities of crops and vegetation, resulting in hunger.

Life in a low-income country can be tough.

Looking over the Uganda border into Western Kenya 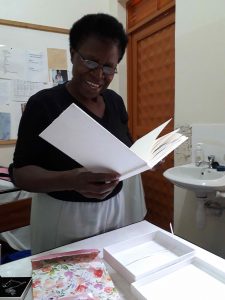 Psychiatric Clinical Officer Nancy Mwebesa was given a memorable send-off by her friends and colleagues at Kisiizi Hospital at the end of June. After a lifetime working in Ugandan healthcare, Nancy is taking a well-deserved retirement. She won’t be going too far away, however, as we hear that she is going to make her home in Mbarara town, a couple of hours up the road. When we spoke with Nancy about retirement plans during our recent November visit, she was looking forward to the next phase in life, and having more time for her church, her garden, for friends, and for her handicrafts.

Some of us have known Nancy since 2010, our first trip to Kisiizi, to explore the possibility of a mental health partnership between Kisiizi Hospital and Cheshire and Wirral Partnership NHS Trust.

At that time, Nancy began to tell us something of her story, which began with how she had come to undertake Psychiatric Clinical Officer training at Butabika, the National Mental Hospital in Kampala. She had completed it 3 years previously, which allowed the first PCO, Yusufu Kuule, to leave for Kampala to study Community Psychology at Makerere University. Nancy had started work as a young woman as a Nursing Assistant, but soon realised that she was capable of more, and trained as an enrolled nurse, and then as a registered general nurse. Her compassion for the mentally ill led her to further training and she finally qualified as a Registered Mental Health Nurse. Training is individually costly in time, effort and money, and she had hoped that was an end of it, but was persuaded that there was a need for her to train as a PCO. Reluctantly, she uprooted to Kampala with her children, to live in a rented room in the city for the two years, in very impoverished circumstances. However, she embraced every training opportunity offered with enthusiasm, and was obviously appreciated by her tutors for her ability and motivation.

As we got to know each other better, later in the visit, she told us of the earlier difficulties she had had to overcome in her long journey. She had 4 children, the middle ones being twins, and when the youngest was very small, her husband left her to take up a relationship with a much younger cousin, with whom he has remained and now has 9 children by. Nancy and he separated. Nancy was devastated, almost wanting to vanish from the face of the earth.

Later, she further told us of how as a child she used to blame her parents for her weak leg, but eventually realised they had done their best to seek treatment for her. (An injection for a skin infection had gone wrong and caused a wasting paralysis of the limb, which never fully recovered.) She did not start school until she was 12, through her parents’ worry and protectiveness of her. They feared that the long walk to school would be too much for her. Her father didn’t expect her to attend beyond Primary 3, but Nancy’s determination took her much further. Even at retirement, she also credits her father’s pride, love and encouragement for what she has achieved in life.

Nancy has talked to us about her willingness to tell her story. She says that it shows others that they are not alone, that recovery is possible, and that it is good not to dwell on or blame the past, but to find ways of moving on. An inspiring woman, Nancy Mwebesa.