Our latest programme in Jamie’s Fund is called Community Leaders’ Sensitisation.  This is bringing those who are seen as leaders together in a group of about 30 for a day to raise their awareness of the signs and symptoms of mental ill-health and epilepsy.

We developed the material to be used based on World Health Organisation programmes. Bwindi Community Hospital were one of the first places to pilot it for us.

Kuule Yusuf, the leader of the mental health service, set up two days and invited about 60 local leaders to attend.  Many of these were church leaders, with some policemen as well.  The two traditional healers who were invited didn’t attend, which is a pity.

There were a lot of discussions as people heard about how mental illness can manifest itself. The church leaders responded saying ‘but we get people coming to see us with these problems and we don’t know how to help them”.  The police similarly realised that some of the disturbed people who come to their attention also had some of these symptoms, and that perhaps the hospital would be able to help more effectively.

One of the church leaders asked: what is the difference between a “spiritual” illness and a “mental” illness?   A good question.  Kuule asked them what were the signs of the two kinds of illness and made a list of each.  It became apparent that the signs were very much the same, and they all agreed that help from the hospital could be appropriate.

Both sessions were felt to be helpful by everyone. Since then the local police have referred two people with possible mental illness and there has been a steady stream sent by the church leaders, including one person who has been disturbed for about 6 years and now has started on treatment.

Kuule says they were very helpful but the number of people they were able to train is small compared to the size of the district.

We have now contacted all the hospitals we work with, inviting them to hold these sensitisation days. We need to ensure that the message is taken out into the communities.

It only costs about £20 for a local leader to attend one of these sessions.  If you would like to support this work please click here. 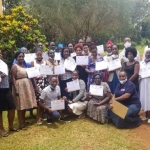 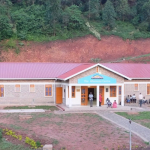 The boy in the drain.
Scroll to top