Several years ago I (Maureen) met Francis, who was shackled at home because his family and the village were too frightened by his mental illness to allow him any freedom. Not long afterwards he succeeded in killing himself. Today we met his son, who had been in prison for three years with no treatment for his mental illness and was beaten most days. Julius has been at home now for 2 years and has been cared for by the mental health team from Kisiizi, with monthly injections for his mental illness. 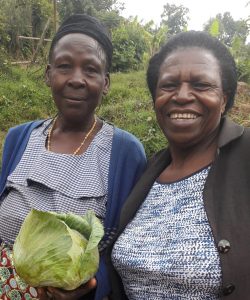 For the first time he is free from symptoms. He no longer hears the tormenting voices, is clean and well nourished. He still wears his shackles but the family are so thrilled by his progress that they are almost ready to remove them. Today was the first time that Sister Nancy has seen Julius smiling, and his grandmother smiled the whole time we were there. As we left, Grandma plunged into the vegetable patch, seized a cabbage, and ceremonially presented it to Nancy, still smiling.

We climbed up a steep goat track in another village to meet a young man whose wrists were still shackled but not locked together. When ill, Richard is very destructive – he managed to completely destroy his mother’s house on one occasion. Now, with treatment from the team, he is well and able to work in the family fields, playing his proper part in family life for the first time.

Not far away a local teacher discovered that Bruce, a mentally ill man in his early twenties, was shackled and left bound hand and foot in a banana plantation, where he was unwashed and uncared for, half naked, with no toilet facilities, and barely fed. The teacher alerted our team, treatment was begun, and we met a transformed young man, clothed and in his right mind.

An update on James at Kagando 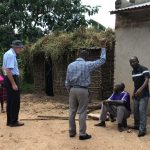 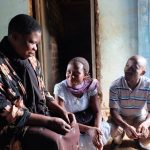